On 26 October, the Georgian Football Federation opened a new football centre on Nutsubidze Plateau in the Saburtalo district of Tbilisi.

The guests viewed the administrative building and other facilities. They also attended the show training involving the boys’ and girls’ teams of AFC Kvartali and participants of the #WePlayStrong project.

“I am delighted to see another stadium being added to the football infrastructure of Tbilisi and the country as a whole. We received this territory two years ago under the condition that we would implement this project, and I would like to express my gratitude to the Mayor of Tbilisi Kakha Kaladze and the City Assembly. Overall, this is an excellent project that includes a full size and a seven-a-side pitch, together with the necessary infrastructure.

This football centre was primarily built for the benefit of women’s, youth and amateur football. It is great to see more and more children starting to play the game each year. They are helped massively by facilities such as this. I would like to specifically thank FIFA, whose Forward programme co-financed this project” – Levan Kobiashvili, GFF President.

The project includes a full size pitch and a seven-a-side pitch with floodlights and a stand for spectators, as well as an administrative building with various functional rooms.

GFF received the territory from the Property Management Agency of the Tbilisi City Hall with the obligation of building football infrastructure. The project was funded by GFF and the FIFA Forward programme. The sports complex will be used free of charge by amateur and women’s teams, as well as children from the local football schools. 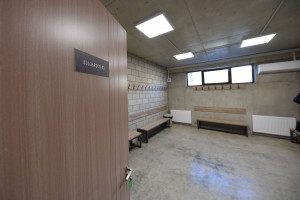 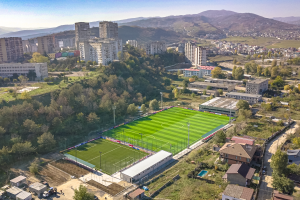